M.D. Gregory and I have been working hard this year. The Promise was a bit of a surprise to us. We didn’t intend to write it, actually, but our go-to cover artist at Sinfully Sweet Designs made the most luscious artwork that inspired the story of Shane and West.

The fun part about writing with someone else is that the story evolves in ways that are shocking and surprising to both of us, so while we knew we were writing an age gap story (West is older than Shane by about eighteen years), at first we had no clue it would also be a mild Daddy Kink story, but low and behold, that’s what those two sneaky characters did.

I’m proud to announce that The Promise, written in the world of New Gothenburg, is available in Kindle Unlimited and for purchase.

We hope you enjoy the book as much as we enjoyed writing it! 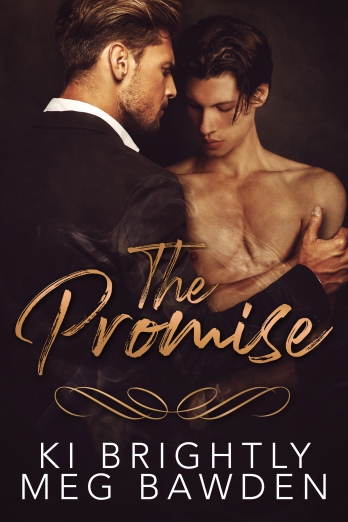 Widowed Before Forty
Lawyer Caleb “West” Weston loses the man he loves, Carter, to cancer. When Carter dies, not only is West left hurting, but Carter’s younger brother, eighteen-year-old Shane, plummets deeply into grief. Both men bury themselves in their pain and forget to support one another. West feels hollow, and Shane’s life goes off the rails.

The Lost Boy
Shane’s parents reacted badly when he told them he was gay, but he had Carter and West to run to when things got tough. They gladly took him in. After Carter dies, Shane feels like he has no one to love him, until one tearful moment between Shane and West turns into something passionate. Afterward, consumed by guilt, both men become more isolated than before.

Second Chance at Love, First Chance to Be Himself
West has never fully embraced the darkest parts of his sexuality, but he knows one thing for certain—he wants Shane as his. Even if being with his dead lover’s younger brother is wrong, fighting his attraction to Shane is hurting them both. He decides to step up and become the daddy he has always wanted to be, one who helps guide his boy back into the land of the living. One large problem remains, during the months Shane was left to his own devices, he made a wreck of his life. West and Shane both need a lot of love to heal. Can they learn to live a new life together, free of shame and guilt?

I write and sunbathe whenever possible. View more posts